I stumbled upon an interesti 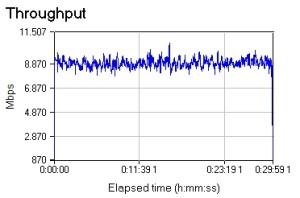 ng fact about the speed of VM NICs. In general I suggest that the maximum bandwith that a NIC can send or receive is limited on the interface speed. So an Intel Pro/1000 Interface NIC on an physical Server can only send with 1Gb/s. It looks like that this satement is not true for VM NICs.

I was surprised as I did some testing on a VM and saw that it was possible to transmit ~9 Gb/s on a 1Gb/s Intel Pro/1000 VM NIC.  In my setup I had 2 VMs running on 2 ESX hosts on different physical servers. Each physical server had a 10 Gb/s NIC. On the VM was a Windows server running that showed a 1Gb/s connection that was running with a 99% utilization during the test. I thought that you need a vmnic3 driver installed to get 10 Gb/s to a VM , looks like that is not the case. The para virtulized driver for the NIC only emulates the speed for the OS. So you can have up to 10Gb/s on a 1Gb/s VM NIC.

Network problem solver
View all posts by Dominik →
This entry was posted in All, Blog. Bookmark the permalink.